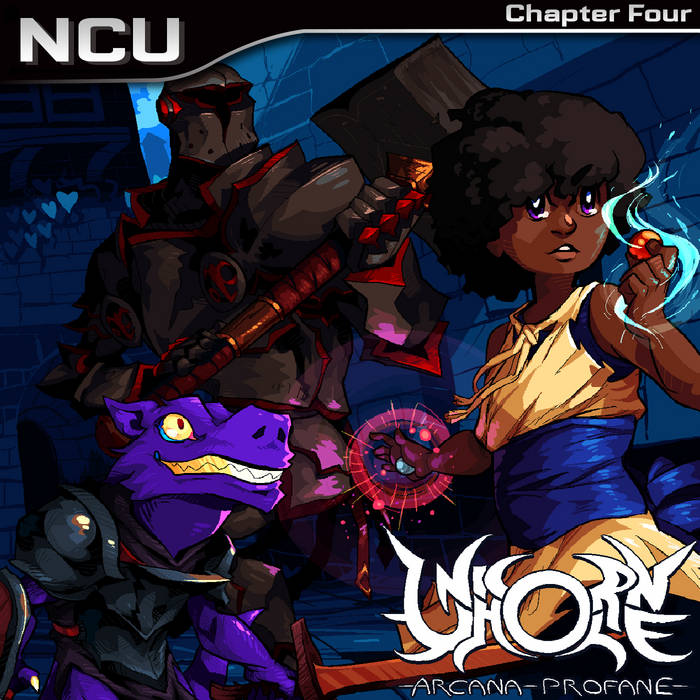 M0SHB1T The whole album contains songs full of fresh and polished sounding eargasms that show that Unicorn Hole can still invent himself new with every new release. Which Witch Two instantly shows what business will happen and sets the whole tone of the album. Diverse and playful synths, super catchy choruses and fat break downs will be sprinkled with occasional raps and experimental styles. If you think it can't get better, wait for the next release and be amazed. He always delivers 110 %. Favorite track: Which Witch Two.

Bry The NCU at it's best!

With some surprisingly catchy choruses and deliciously heavy breakdowns, Arcana Profane is equal parts D&D-style fantasy story and some of the best Nintendocore around.

This album really feels like an entire adventure, with softer catchier songs contrasting with much the heavier ones.

Any song including the character Garth is guaranteed to be some of the heaviest stuff you've heard in a while.
Favorite track: Mismatch / Impact.

Unicorn Hole's fourth full-length album also happens to be the fourth chapter of the NCU. Kat, Astrid, and Grub find themselves up against a witch with impossible powers and a sinister plan. The stakes are higher than just physical damage, however, as the kingdom's relationship with witches is already a volatile one. Can the gang defeat or dissuade their foe before things get out of hand?

If you haven't checked out the previous chapters of the NCU, you should start there! Arcana Profane specifically follows chapter one- Legend of the Light Gem!

Instrumental version of this album:
tinyurl.com/bdda3f7v

Finally, if you'd like to support Unicorn Hole:
www.patreon.com/unicornhole

Unicorn Hole is John Nelson. Some riffs from tracks 3, 6, 8, and 9 were written by these rad dudes: Andrew Viggiano, Jesse Williams, and Shawn Gleaton. The aspects of the mixing that sound good were done by Tyler Hendricks. I did the other parts. Big thanks to Denny Macchiato for repeatedly checking my mixes and helping improve them. The NCU banner was created by Zachary Foster. Julian Vaughan did a lot of proof-reading and story-checking. The Uhole logo was made by Diana Garvin.